Mansfield OKs Zoning for Hundreds of Homes, Apartments. Will it Spark Downtown Growth? 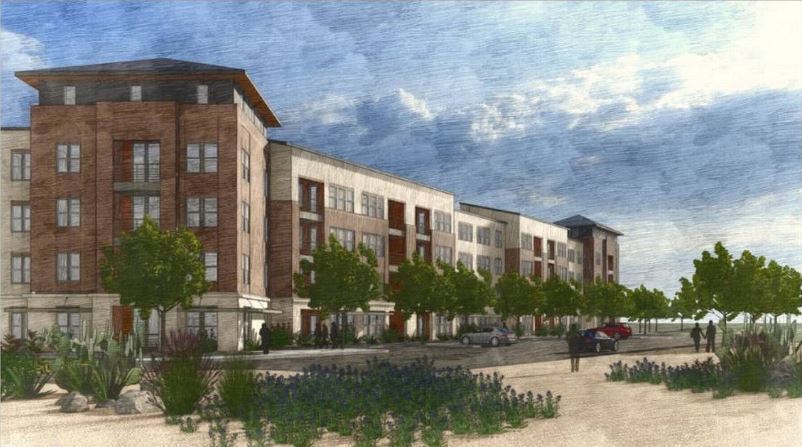 Hundreds of new houses and apartments are coming to Mouser Way and North Main Street just north of downtown Mansfield, a project that business owners hope will be a catalyst for retail growth in the area.

The rest of the council supported the project after some major concessions.

Watson Branch mixes several uses on the open pasture across from Mouser Electronics and Legacy High School. There are 300 single family homes, which include a mix of townhomes, zero-lot line homes and larger lots.

There are two types of apartments. One will be traditional apartments with high-end finishes built by Realty Capital Management, the same company that developed the Mansfield Lofts just to the south. The Lofts have the highest apartment rent in Mansfield. Councilman Casey Lewis pushed to lower the number of apartments from 400 to 350.

The second apartment type will be 200 age-restricted units for seniors 55 and older. These apartments will be developed by Greystar and will have similar rents and luxurious finishes.

Coltart said the apartments are necessary to make the project viable and to secure the financing for the project.

“I think this is an opportunity to provide a project that brings a great demographic to a corridor that we believe really needs it,” Coltart said.

In addition to reducing the number of apartments by 50, the council required that the site plan for the single-family homes be approved before the apartments can proceed, which prevents Realty Capital Management from building only the apartments.

The final piece of the puzzle will an 8,000-square-foot retail and restaurant building along North Main Street. The council stipulated that at least two restaurants be included and if the restaurant has a drive-through, it will require additional council approval in the future. The council is pushing for a sit-down restaurant.

There will also be about 10 acres of parkland with trails along Watson Branch Creek that will be dedicated to the city, Coltart said. The park must be built along with phase one of the single-family homes.

Planning for the project started almost a year ago so it’s been a long time coming, Coltart said. He hopes to break ground in mid-2020 with the first apartments and single-family homes being ready in mid-2021.

“The rejuvenation process has been a time of ups and downs, but by the investments and hard work of all parties, our historic downtown has the opportunity to take its place among its regional and national peers,” Goodwin said.

He cited the success in bringing new restaurants, breweries, event venues, concerts, infrastructure improvements and a host of other new businesses that have come to downtown in the last several years.

“All of the physical and social improvements really only pay off for all of us if there are Mansfieldians who are willing to patronize downtown on a regular basis to support the retail in downtown,” Goodwin said.

But the apartments were a lightning rod of controversy for the council and a few residents who spoke at the meeting.

Realtor Angie Thor said she would rather see more owner-occupied homes and more high-end homes rather than apartments and zero-lot line homes.

“I’m afraid at this price point that’s not what they’re talking about,” Thor told the council. “I think we need higher-end development.”

Houston Mitchell said the apartments will put a strain on the Mansfield school district.

“Why do we want to rezone more property to add to that problem? When I say problem, I believe we have enough apartments as it is now,” Mitchell told the council. “We need more homes, more industrial.”

Coltart said Realty Capital Management is preparing to break ground on phase 2 of the Mansfield Lofts project in early 2020, adding another 266 apartments to downtown. It will also include the long-awaited extension of the Walnut Creek Linear Trail under North Main Street to connect Town Park to a new 3-acre park on the south end of the apartment complex.

The trail will loop around and then follow the grade up to the road so people can connect to the new North Main Street trail that opened earlier this year.

That will allow pedestrians and bicyclists to go seamlessly from Town Park, under North Main Street and then connect to the North Main Street trail where they can go south into downtown without crossing a street, Coltart said.

In the future, the city will extend the trail west along Walnut Creek where it will connect to the future dog park, under construction now on West Broad Street. On the east side of Mansfield, construction is underway to extend the same linear trail from Oliver Nature Park to Texas 360.

Published September 18, 2019 by Fort Worth Star-Telegram